I've been meaning to try making lavender lemonade for years now. A friend and follower asked me if I had a recipe for lavender lemonade. This was the impetus to get cracking on developing a recipe. It's July and my lavender is in full bloom so the timing couldn't be better. I used culinary dried lavender buds in my first recipe attempt and for the last few attempts I used lavender from my own bushes that I allowed to dry for a few days. The verdict: I got a stronger purple colour from the culinary lavender. The lavender flavour was not any more pronounced with my lavender. So the verdict is, if you want it to have a more purple colour then use culinary lavender. If not, just use your own lavender. Make sure you cut it and allow it to dry for at least a couple days or more. However, it's important to note that if you decide to use your own lavender it needs to be the Lavandula Angustifolia (English Lavender). This is common lavender, a Mediterranean variety actually, and one most often seen in the lavender fields of Provence. This variety is what is used for culinary purposes. Other varieties, such as Spanish lavender will not impart the same flavour. In the preparation time I do not include the minimum of 2 hours or so to infuse the lavender into the boiling water. Most recently, another method I use is to soak the lavender from my own bushes overnight in cold water. It imparts just as much lavender flavour and a slight purple-ish hue. Because this is made with fresh whole lemon it will have some pulp. If you do not prefer any pulp just use the juice and zest of the lemon. As for sweetness I tried making this with maple syrup, raw honey and grape nectar (Bored o Blanc variety by Domaine Santé). You may with to adjust the quantities of the sweetener depending on how sweet you like your lemonade. Personally I prefer mine a little more tart.

Place the dried lavender buds in a mug. Pour the 1 cup of boiling water over the buds. Allow to steep for at least 1-2 hours. Alternatively, you can soak the lavender in cold water overnight. Use a nut milk bag or cheesecloth to strain out the soaked lavender, squeezing as much water out as possible. Compost or discard the soaked lavender. 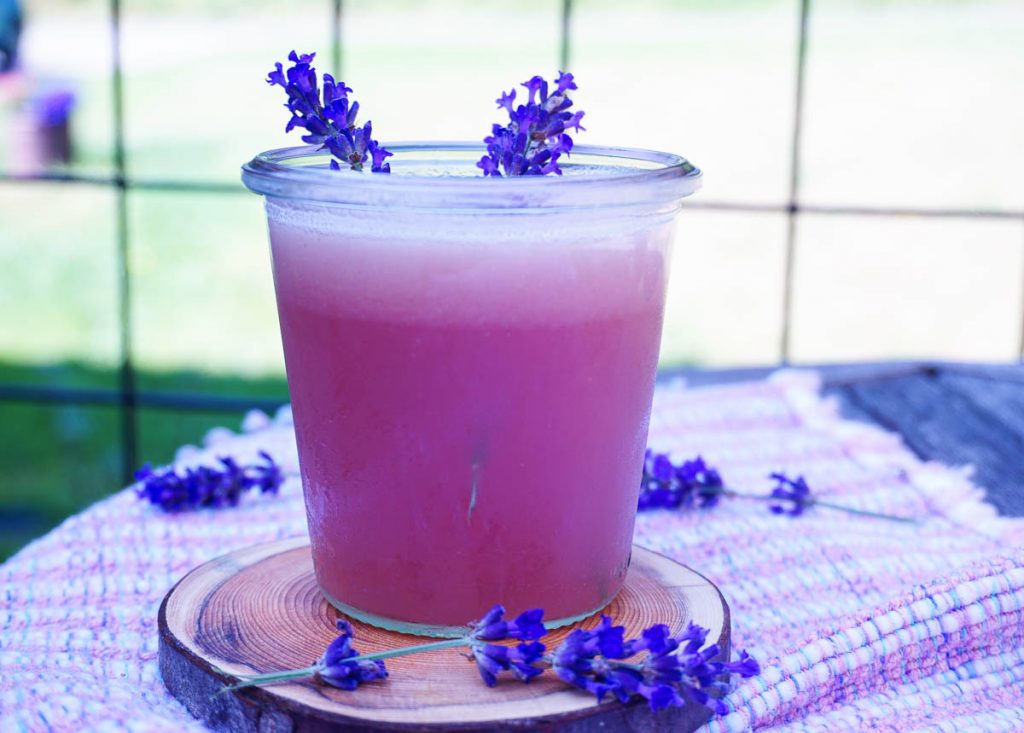 Cut peeled lemon/s in half and remove the seeds. Alternatively, zest and juice 2 large lemons instead of using a whole lemon. Add the lavender water and the rest of the ingredients to a high powered blender and blend for a minimum of 2 minutes or until smooth and frothy. Place any extra portions in a large glass jar in the refrigerator for up to a day. Shake well before enjoying.